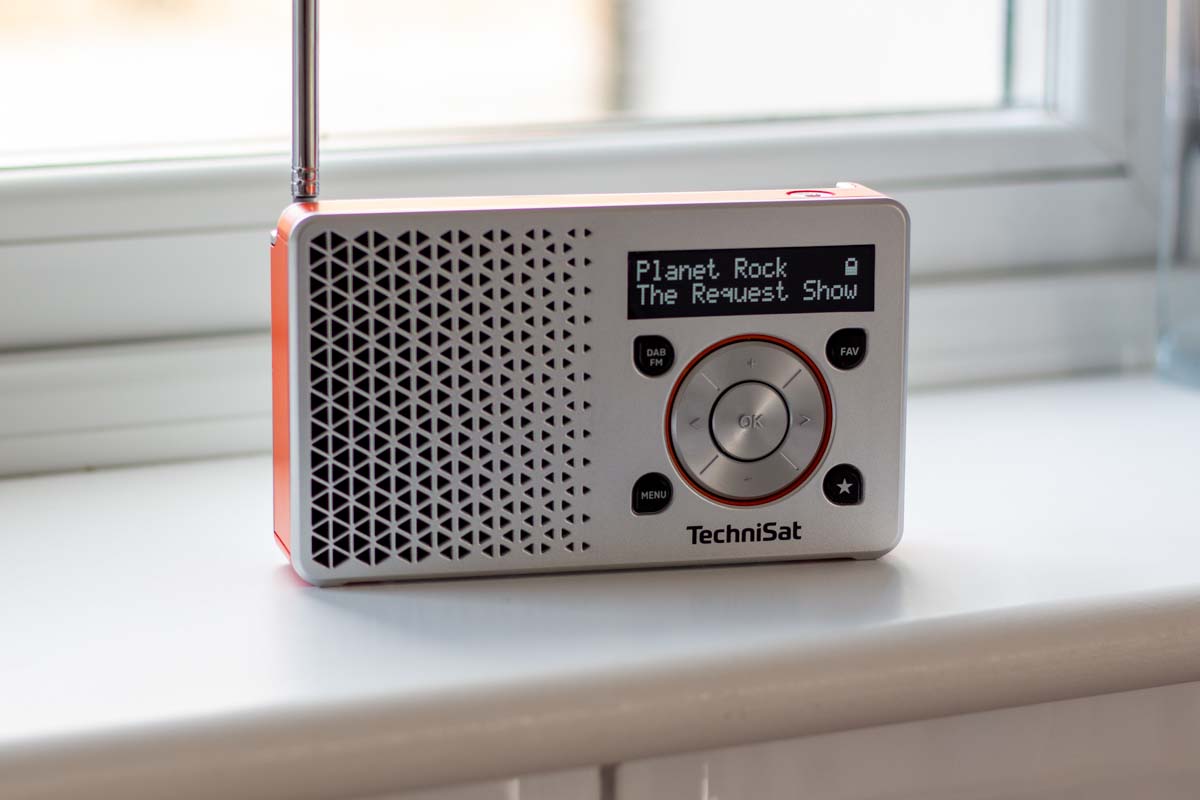 The TechniSat DIGITRADIO 1 is a portable DAB/DAB+ and FM radio. A rechargeable, removable battery in a widely available size is very welcome in this small radio. 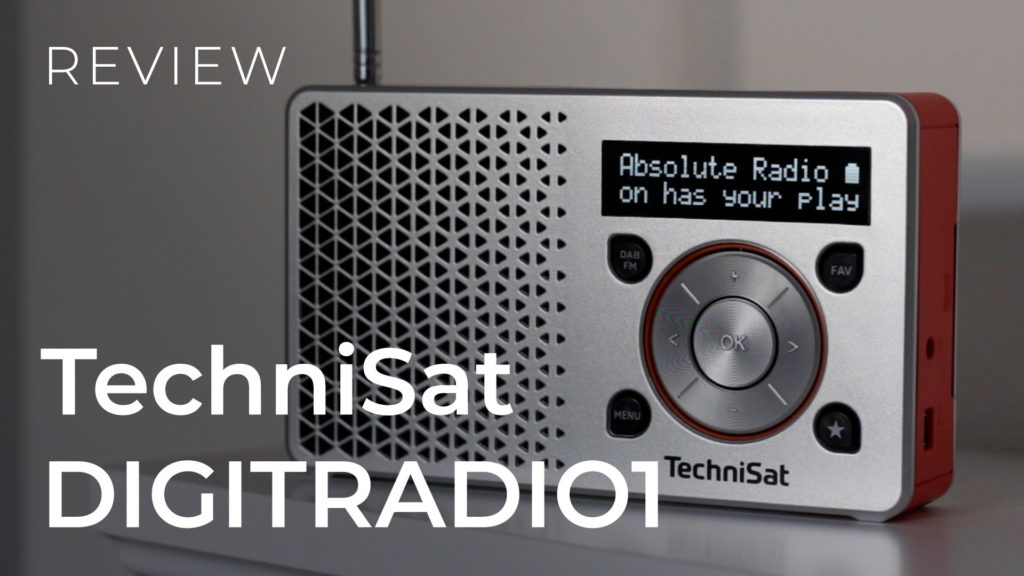 The small TechniSat DIGITRADIO 1 has one of the more interesting designs among portable DAB radios. It’s available in black and silver, white and silver, silver and orange and an array of other combinations if you don’t mind extra branding. It boasts a rechargeable battery, bright display and a speaker concept which aims to improve bass sounds. The radio has been developed and is made in Germany.

It’s important to mention that the radio isn’t currently sold by any of the big electrical retailers in the UK. You may be able to buy the radio online in the UK, or in shops in Europe, but the model in this review is from Germany and comes with a Europlug adapter and German user manual.

The DIGITRADIO 1 receives DAB, DAB+ and FM radio stations. It has a built-in rechargeable battery that can be removed and replaced by opening the battery slot on the back of the device. The front of the radio has a small OLED display, the controls and a single speaker. A headphone socket is found on the right side of the radio above the power socket.

To set the radio up the small battery is inserted first. This is charged any time that the radio is plugged into a power source. When the radio is connected to mains power for the first time it will switch on and prompt to select a language. English, German and other languages can be chosen with the left and right buttons. Then the radio will scan for available DAB/DAB+ radio stations.

Scanning for stations is quick and the radio found all of the available DAB stations here. Reception was also good for any FM radio stations that aren’t available digitally.

On first impressions the radio looks and feels different to many sub-£50 digital radios. Like some models from Sony the radio isn’t very deep. When holding the device occasionally it feels as if the plastic body sections move slightly in your hands. The colours, unique speaker grille and control layout help set the radio apart from similar devices. It weighs under 300g.

The radio comes in a small, colourful box with no polystyrene. As the radio is from a German retailer it includes a two-pin Europlug USB power adapter. Also included are a battery and the standard USB A to Mini-B lead. The German language instruction book is detailed and well laid out over 60 pages. A multilingual manual can be downloaded from the TechniSat website. Also included is information about the warranty and product registration.

The USB power lead has a ferrite bead to help suppress electronic noise. This is good to see and not something included by every manufacturer that uses USB leads for power. The included USB power adapter could be used in the UK with a travel adapter or a three-pin USB adapter purchased separately. By using a USB lead instead of a traditional power adapter the radio can be charged from a USB power bank. It also means the radio can be powered or charged from a USB socket, for example in a hotel room, potentially saving the use of a power outlet or travel adapter.

The rechargeable battery is removable, allowing for it to be swapped over with a fully charged battery. The battery is also a common size, a BL-5C, made popular and widely available thanks to its use by Nokia in the world’s best selling mobile phone. This means if the battery degrades over time it can be replaced with a new one.

The TechniSat DIGITRADIO 1 has a two year warranty. Technical support is available but via contact details in Germany.

TechniSat is best known in Europe for its satellite receivers and iconic smiley face satellite dish. The company released its first digital radio in 2012 and launched the DIGITRADIO 1 in 2017.

The radio was developed by TechniSat in Dresden and is one of a handful of DAB models made by the firm at a factory in Saxony, Germany. Information about their approach to production and the environment can be read on their website.

A single speaker is positioned behind the plastic grille on the front of the radio. The speaker sits above a passive bass membrane which is designed to increase the bass or low frequency response. On TechniSat’s website they explain that this was developed because the design of the radio didn’t allow for a deeper housing.

The passive radiator does this by responding to the changing air pressure in the enclosure from the speaker moving back and forwards. Compared to other radios with 0.7W to 1W RMS output power this does appear to work. When listening to Alison Moyet’s “Is This Love” on Heart 80s the drums have more presence than on a comparable radio. The bass in “Stuck in the Middle With You” by Stealers Wheel on Heart 70s also comes across well.

On FM stations songs like “Love Action” by Human League sounded noticeably dynamic. A song like “Don’t Dream It’s Over” by Crowded House with its prominent drums and bass also sounded better with the radio’s speaker setup.

Some DAB+ radio stations with low bitrates sound as if there is some sibilance on speech and music. Sometimes a DAB station like Magic Soul at 80kbps was preferable to a DAB+ station at 32kbps for this reason. It would be interesting to hear how the radio sounds in Germany with a station like Antenne Bayern or 1LIVE at 72kbps on DAB+.

Power output is 1W RMS according to the specifications. There are no sound or EQ settings which can be changed.

Output from the headphone socket sounds clear with good stereo reproduction. The volume of the headphone output is almost uncomfortably loud before getting to half way on the volume level. Music on Heart 80s, such as “Hungry Like the Wolf” and “Somebody Else’s Guy”, sounds surprisingly good for 40kbps on DAB+.

User interface on the TechniSat DIGITRADIO 1

The controls are all on the right side of the front of the radio below the display, except for the power button on the top.

Changing the station or the volume is done with the round ‘d-pad’ type control. Volume is adjusted by pressing the top or bottom of the round silver ring. Stations are browsed by pressing the left and right arrows. The control is tactile and provides good feedback when pressed. An OK button is positioned in the centre of the ring. When changing stations this doesn’t need to be pressed (but can be) as the radio will quickly tune if you pause on a station in the list.

A dedicated button is used to quickly switch between DAB and FM. A button for presets and another which can be dedicated to a station are positioned on the right. Up to 20 presets can be stored with the favourites button. The preset in the first position is available with the direct button, illustrated with a star.

The radio has an OLED display which shows two lines of text or information. By default the radio shows the name of the station with scrolling text underneath. This can be changed to show the date, time, signal strength and other technical information. To change the information it’s necessary to go into the menu, choose an option and go back to the main screen. The OK button isn’t used for anything when the radio is tuned to a station and being able to use it to cycle through the display options would have been useful.

As it’s an OLED display it has good contrast and sharp characters making it easier to read than an LCD display. OLED displays are normally the preserve of premium radios like the Ruark R1 and Revo Supersignal. Although the display is smaller and simpler than on those radios it’s still good to see. TechniSat says the OLED display has a positive impact on battery life.

On the top line of text the last two characters are lost to a power icon, showing the battery level, charging or a power cord. This isn’t a problem for “Planet Rock” but the end of “BBC World Service” will be missing.

The radio can be powered from the battery for around ten hours.

Verdict on the TechniSat DIGITRADIO 1

The overall impression from the DIGITRADIO 1 is that it’s been developed with its users in mind. Using a removable, rechargeable battery is a positive move that avoids the use of disposable batteries whilst prolonging the life of the radio. The fast interface, tactile buttons and clear display contribute to a smooth and functional experience.

The approach to sound, particularly lower frequencies which can suffer in radios this small, appears to work well. The overall design and range of colours shows that all small radios needn’t look the same.

Pricing and availability in the UK isn’t as simple as in some European countries. The model in our review, including delivery to the UK, cost around £52. Prices vary depending on the colour. The radio in black and silver can be found for €45 in Germany. Some small retailers sell the radio in the UK but expect to spend around £80. Unless you are specifically attracted to the radio, are willing to read the English manual online and work around the Europlug adapter a radio intended for the UK could be a better choice.

If the radio can be purchased for around £50 and you don’t mind the quirks of a product intended for the German market this would be a good purchase.