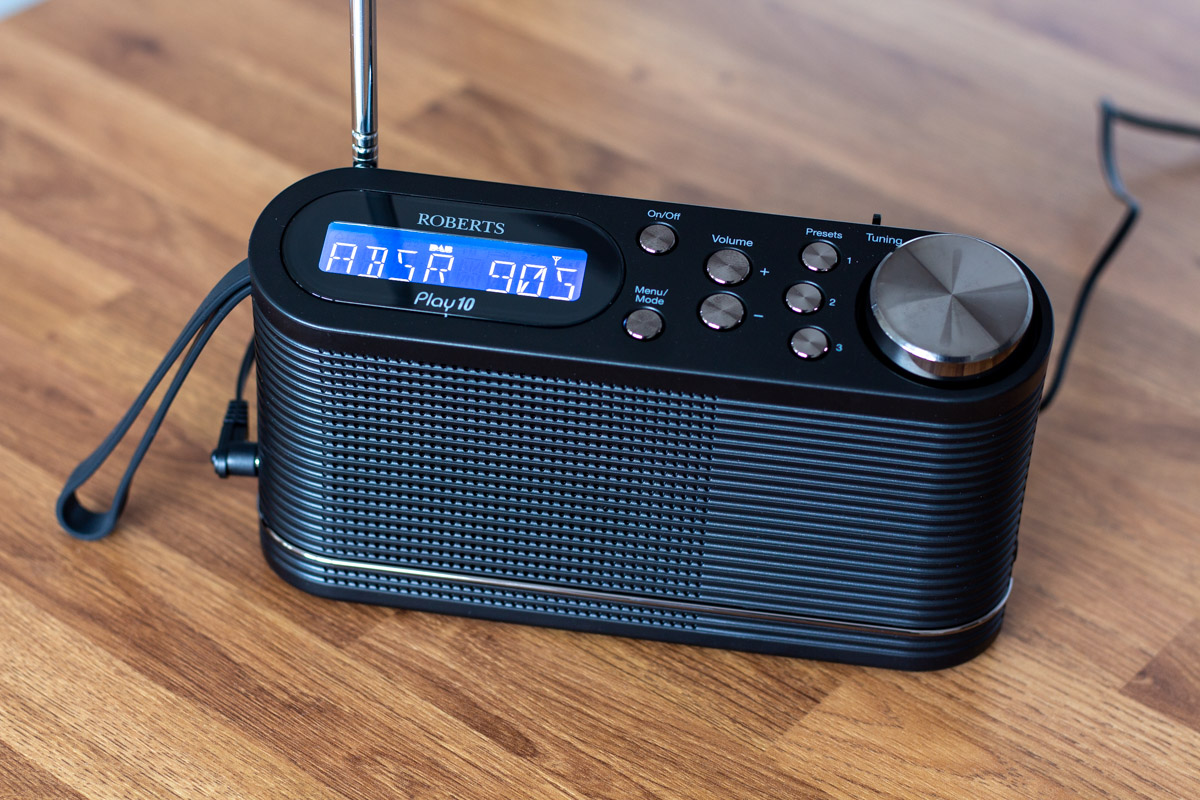 The Roberts Play 10 is an affordable DAB/DAB+ digital radio from a well known brand. Its large display, easy to use controls, light weight, battery and mains power options and carry handle make it a good portable radio. 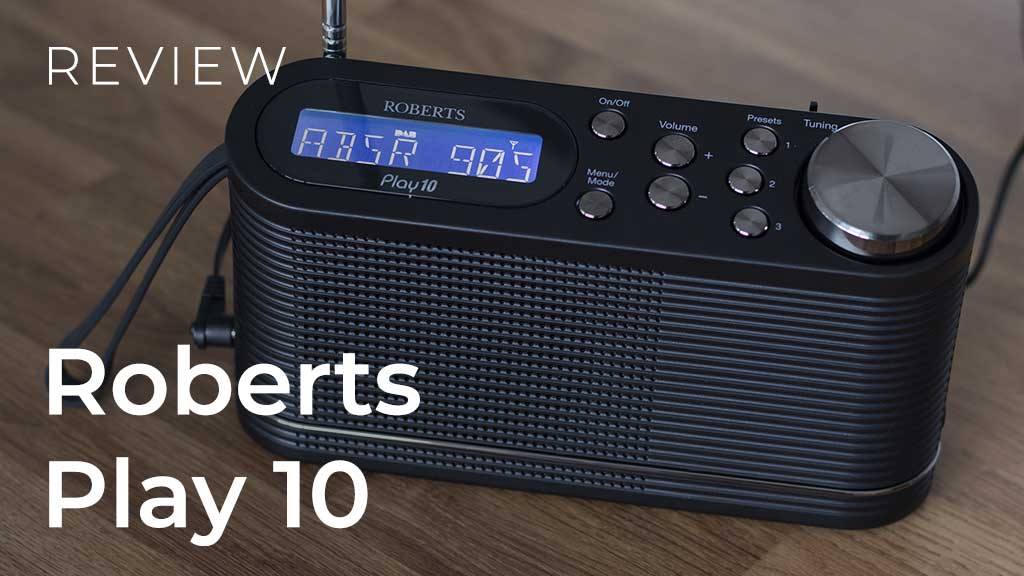 The Roberts Play 10 is a portable DAB/DAB+/FM radio with a single speaker. It’s available in black or white for around £40 and is the cheapest digital radio from British brand Roberts.

The radio can be powered with the included adapter or AA batteries. On first impressions the radio is smaller than it looks in photos. The radio measures around 18cm wide (excluding the power adapter when it is plugged in) by 10cm tall.

In this review we’ll set up the radio, see how it sounds and evaluate how easy it is to use.

Setting up the Roberts Play 10

In the box is the radio, an AC power adapter and an instruction manual.

After the power adapter is plugged in and the On/Off button is pressed for the first time the radio will scan for DAB stations. The auto scan is fairly quick and finds all 80 available stations in this area in under 18 seconds.

Reception of DAB digital radio stations is good. Some radios struggle to receive Planet Rock and Jazz FM in our location, but if these break up on the Play 10 adjusting the position will improve things.

In the FM mode the radio didn’t stop at some stations when scanning the FM band. When a local community radio station was tuned into manually there was some background hiss. The name of the station from RDS was also not shown. In the same position a Sony XDR-P1 did find the same station during a scan and the station name, followed by RDS radio text, was displayed.

This also occurred with the radio not finding BBC Radio Tees during a scan, while the Sony did with RDS. The Roberts Play 10 did however perform better than a supermarket DAB/FM radio. Many radio stations are available digitally, but some local commercial and most community radio stations are not.

The power lead is longer than most we’ve seen with a portable radio. The battery cover is also easy to open for the insertion of four AA batteries.

The manual is quite comprehensive with detailed instructions and diagrams. This should make it easier to read than quick start guides and large instruction sheets with small text.

The Play 10 comes with a two year warranty. Roberts also sells spare parts on its website for the radio. If the telescopic antenna gets broken or the battery cover goes missing you can buy a new one and carry on using the radio. A replacement power adapter will set you back about £25 including VAT and postage (in January 2021). Other parts including a new wrist strap are currently listed for under £10.

Sound from the Roberts Play 10 is good for a radio of this size and price. When listening to stations like Capital XTRA Reloaded and Union JACK, both DAB+ stations at 32kbps, vocals come across well.

The radio slightly lacks in bass, particularly compared to the similarly priced Pure Elan One. Music and speech programmes sound clear and crisp. Some digital radios at this price can sound dull and heavy but the Play 10 manages to avoid this. For regular music listening rather than a kitchen or study radio the next highest models in the Roberts range, like the Blutune 5 or Rambler BT, would be a better bet.

In the specifications the output power is given as 0.7W with a 76mm loudspeaker.

A 3.5mm headphone socket is provided on the right side of the radio. Sound from the headphone output is quite flat compared to the Pure Elan One. When listening to Rose Royce’s “Love Don’t Live Here Anymore” on Heart 70s with the Pure the drums are clear and obviously in stereo. The same song on Heart 70s on the Roberts sounds quite dull with any stereo image difficult to hear.

The Pet Shop Boys’ “What Have I Done to Deserve This” sounds full and somewhat detailed with headphones on a cheaper DAB radio. On the Play 10 tuned into Heart 80s it sounds less clear.

News and talk radio stations like the BBC World Service sound fine from the speaker and headphones.

All of the radio’s controls and the display are positioned on the slightly angled top of the radio.

The LCD ‘starburst’ or fourteen-segment display shows the name of the radio station, mode (DAB or FM) and a signal strength meter. The large white text on a blue background is very clear and easy to read. The display can only show eight characters at a time which isn’t an issue for Absolute Radio, BBC R2 or Smooth. However Union Jack Dance is shown as UJ DANCE and Capital XTRA Reloaded becomes CAPX RLD.

Unlike on some radios the time isn’t permanently shown. The station name, scrolling text, time, date and other information can be toggled by pressing the Tuning/Select knob. The display looks slightly old fashioned but the large text makes tuning very easy.

The Tuning/Select knob is on the opposite side. The 35mm diameter knob provides good feedback when turning and pushing to change the radio station. Browsing the 80 stations the radio found is very quick and easy with the Tuning/Select control.

The volume, presets, power and mode/menu button are in the middle. Volume up and down buttons are situated in the middle of the buttons and slightly larger. The On/Off power button is on the top left above the Menu/Mode button. Pressing the button once opens the menu while holding it switches between the DAB and FM modes.

Three dedicated preset buttons are next to the tuning control. The radio only has six presets with three for digital stations and three for FM. Saving and recalling presets is very easy.

The controls feel good and have a slightly premium appearance. The labels around the buttons aren’t the largest or brightest, but a good layout of controls makes them easy to distinguish.

A flexible wrist strap and the light weight of the radio makes it easy to take between rooms.

The single line display with large characters, an included mains adapter and simple operation make this an ideal radio for many users. Not everyone will want or need displays with lots of information or Bluetooth connectivity.

Compared to its closest rivals from other brands the Roberts Play 10 is starting to look a little dated. But the small footprint, good sound and large station selection knob all mean it’s practical and easy to use.

The Roberts Play 10 is definitely worth considering for small kitchens, studies and as a portable radio to carry around. 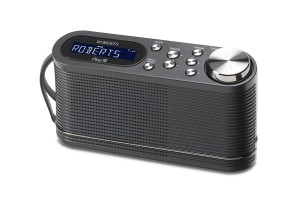