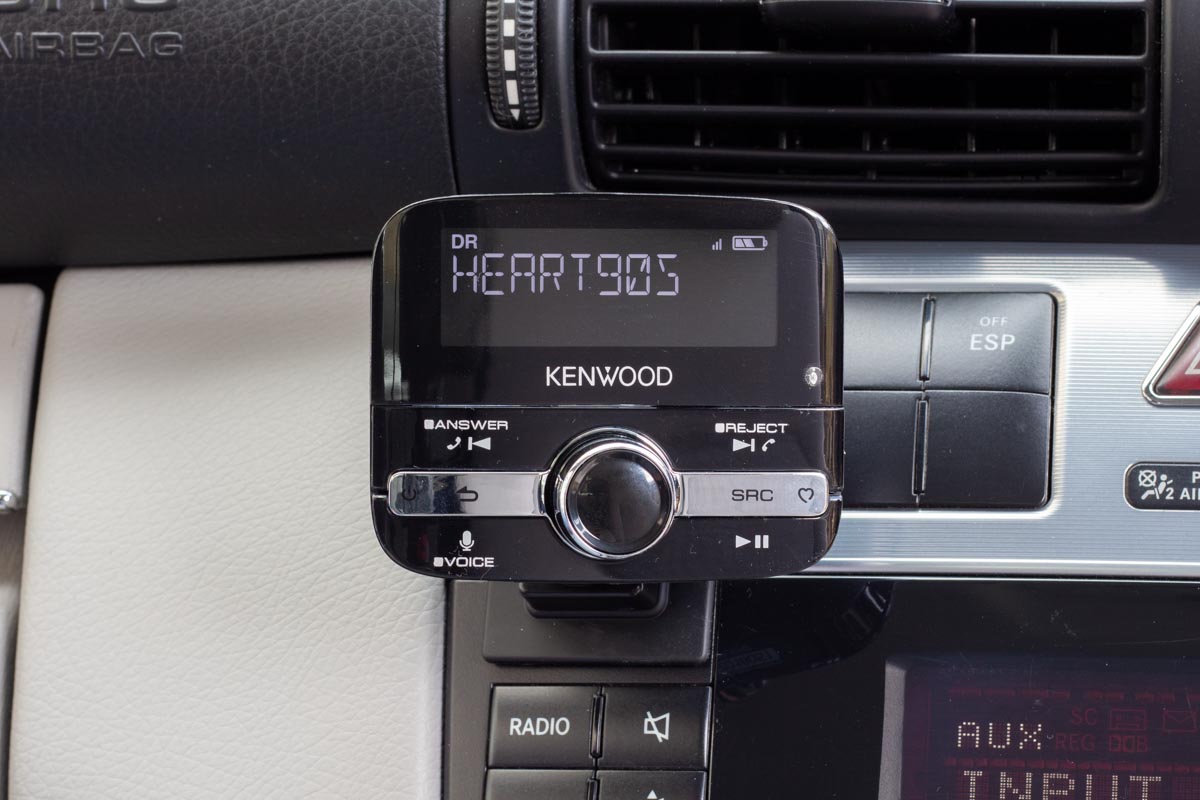 The Kenwood KTC-500DAB includes everything that's needed to upgrade a car with DAB digital radio, Bluetooth music streaming and hands-free calls for under £80. 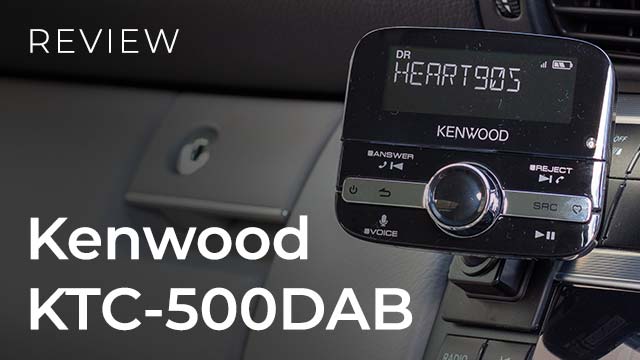 Digital radio adapters like the Kenwood KTC-500DAB offer one of the easiest and cheapest ways to start listening to DAB radio stations in a car. As an ‘add-on’ adapter you don’t need any tools to install the device and the existing car radio stays in place.

Kenwood’s KTC-DAB500 car DAB adapter is installed on the dashboard and enables reception of DAB/DAB+ radio stations. It also has Bluetooth connectivity for streaming music and podcasts or making hands-free phone calls. Full installation instructions are included and the adapter can be installed at home or professionally.

In this review we’ll install it in a 2004 Mercedes-Benz C-Class, set up the DAB and Bluetooth modes and test radio reception and usability.

The box contains everything that’s needed to install the adapter. The antenna which will affix to the windscreen already has the power and audio cables and a grounding tail attached. A cleaning cloth is provided for the windscreen before installation.

The wireless controller comes with a mounting bracket and AAA batteries. For hands-free calls a wired microphone is included. If the cable from the antenna can’t be tucked behind the A-pillar trim the included self-adhesive cable clips can be used. The instruction manual covers setup and operation of the DAB adapter.

Kenwood provide a 12V adapter which has two USB sockets. One is for the DAB adapter and the other could be used for charging a phone. Manufacturers of these types of DAB car radio adapters often recommend using their 12V adapter rather than an aftermarket one which could cause interference.

On the back of the antenna is a self-adhesive pad. Many DAB film antennas need grounding to the metal A-pillar but the Kenwood aerial has a magnetic grounding tail which slides behind the car’s roof lining. The film antenna is then clipped into the black antenna box and affixed to the windscreen. Next the cable is routed to the 12V adapter and an aux-in socket if the car has one.

Using an aux-in socket will provide the best audio quality. Otherwise the adapter can use an FM frequency which can be tuned to on the car’s original radio. The bracket for the wireless controller can then be positioned in a convenient location. The wireless controller does look better than those which leave cables trailing across the dashboard.

For cars without an aux-in socket the FM mode can be used and this worked well. In FM mode the adapter will prompt to choose a frequency and the instructions mention to use one which isn’t already used by a radio station. The unit picks 87.6 FM by default which should be free in most of the country.

If the sound isn’t very good on FM changing the frequency is straight-forward through the settings. It would have been good to see the adapter pick the best frequency and change it if a better one is available.

Overall the instructions are good with clear diagrams and the setup process is simple. As a single package there is one set of instructions to follow and the grounding tail magnet is much easier to install than a conventional windscreen antenna.

After scanning for stations the first time the adapter didn’t find all of the services we would normally receive. After removing and re-inserting the grounding magnet behind the head lining the reception was improved. A signal quality meter can be displayed and this might be useful in fine-tuning the location of the magnet if reception doesn’t seem as expected.

Digital radio stations are stored alphabetically and can be browsed and chosen with the select dial. The experience is similar to using a normal DAB radio with a select knob and is very intuitive. An autotune can be initiated at any time by pressing and holding the select dial in digital radio mode. The adapter shows the short version of radio station names in common with most DAB in-dash car stereos.

Reception of DAB digital radio stations is very good. The signal for Planet Rock and Virgin Radio was lost for a few seconds in a spot with poorer coverage. There were no drop-outs of BBC or local digital radio stations while driving in County Durham. Sound quality is very good with the aux-in connection or FM frequency. Listening to stations like BBC Radio 5 live, talkSPORT and Absolute Radio digitally was a big improvement over medium wave in the car.

Up to 20 radio stations can be stored as presets. These can then be browsed with the forwards and back buttons. After saving some presets at home this became the preferred way of choosing favourite stations. The buttons provide good feedback and it was easy to switch between half a dozen stations without looking at the wireless controller.

While driving the interface is easy to use. Each of the buttons is a different shape and they are laid out logically. Where the adapter was tested around 80 digital stations can be received and in a city like London there would be even more. Scrolling from BBC Radio 6 Music to Planet Rock can take a few glances, but the presets are easy to save and recall.

The bracket offers a good range of adjustment and allows the wireless controller to be installed on top of the dashboard or the front of the radio. When using the forwards and back buttons to browse presets, or pressing the SRC button, sometimes squeezing the device rather than pushing it felt more reassuring.

At night the backwards and forwards (also the answer and hang-up buttons for Bluetooth), voice control and play/pause buttons are backlit. This is good to see and an issue we noted another DAB car radio adapter. A light sensor also changes the brightness of the display.

The screen dims after 15 seconds by default but this time can be extended. In practice after tuning into a station it wasn’t necessary to glance at the device to see just the station name. The screen wakes up as soon as a button is pressed.

Bluetooth is built-in to the Kenwood KTC-500DAB and can be used for music streaming and hands-free phone calls.

Pairing a phone over Bluetooth with the adapter was trouble-free. After pairing a phone music can be played by pressing the SRC button, turning the dial to ‘BT MUSIC’ and pushing it in. The dial can then be turned and pushed to select a song to play. After that the previous and next buttons can be used to skip through songs.

The artist and title from the current media is shown on the display. The display doesn’t have many characters and any artist names and song titles that don’t fit will be scrolled across. It’s normally possible to tell which artist and title you are browsing through but it does feel slightly limiting. On the upside the characters are large and clear with good contrast which is preferable to displays with more and smaller text.

Media streamed over Bluetooth using the aux-in socket sounds very good and over FM also sounds good. The adapter also had no trouble playing and skipping through music on Spotify with artists and titles displayed correctly.

Phone calls can be made by choosing the ‘PHONEBOOK’ option and then browsing contacts. This worked quickly and there is also an option to see dialled, missed and received calls. The mobile phone signal and battery level are shown on the top right of the display.

According to the Kenwood specifications the Bluetooth mode has noise and echo cancellation. Calls sound clear in the car and the microphone sounds normal for a DAB radio with hands-free.

One of the most impressive features is the button to use the personal assistant on a mobile phone. In the Bluetooth mode and without any special apps or preparation it was possible to ask Google Assistant to start a playlist on Spotify. This happened surprisingly quickly on 4G and without touching the smartphone. Voice dialling with Siri on iPhones is supported and this will be easier than scrolling for contacts on the wireless controller.

Verdict on the Kenwood KTC-500DAB

The Kenwood KTC-500DAB is easy to install and fairly simple to use. Reception of digital stations is very good, but like the Sonichi S100-DAB from Halfords it did lose a weaker signal for a few seconds on a particular stretch of road.

In the box and the back of the manual it’s mentioned that the device is “Powered by Pure” and there are many similarities with the established Highway range. The KTC-500DAB comes with the digital radio tick mark to show that it’s been tested and approved by Digital Radio UK.

At £79.95 from the Kenwood Shop the adapter offers very good value for money and is a great option for in-car DAB and Bluetooth. 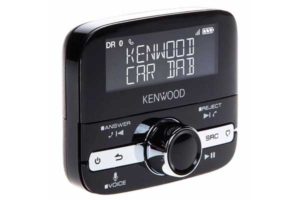