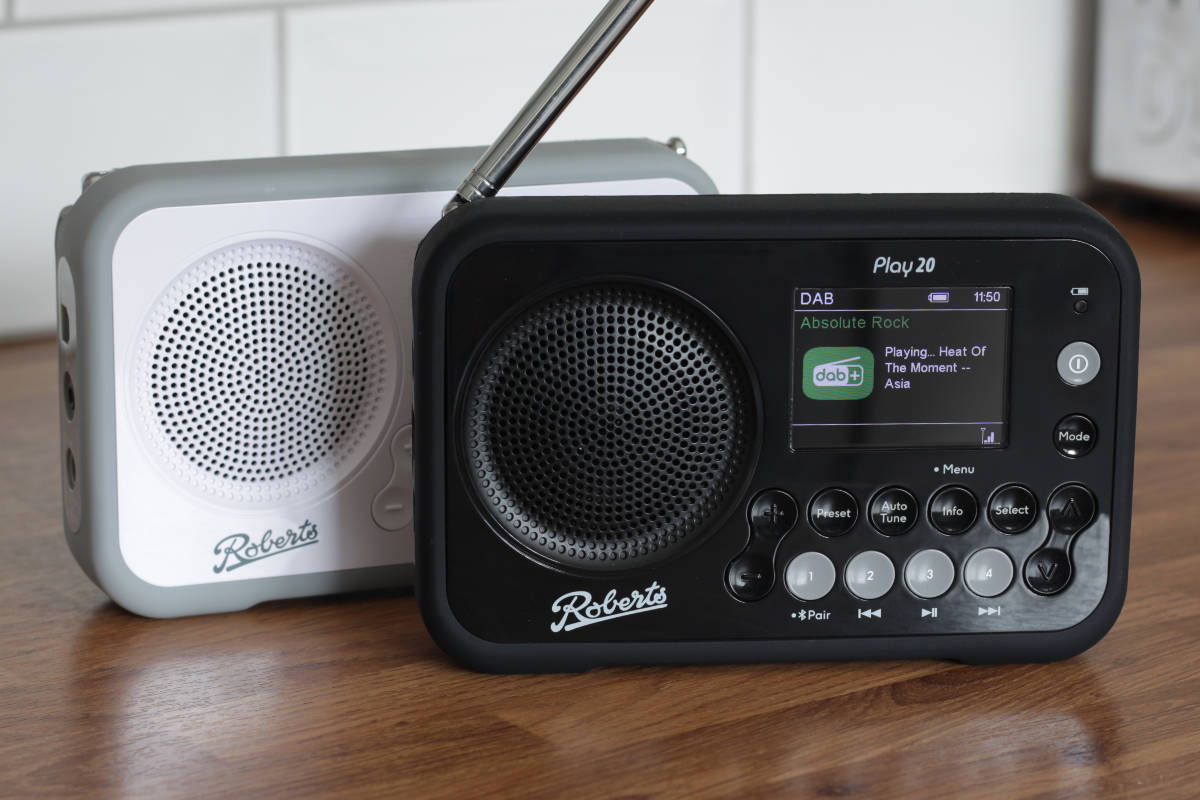 The Roberts Play 20 is a very good portable DAB/FM radio with Bluetooth. Built-in battery charging and a soft bumper make it a truly portable radio.

The Roberts Play 20 is a portable DAB/FM radio with Bluetooth. In black or white the design is different to most DAB radios on offer today. Controls are arranged on the front of the radio with a colour screen and the single speaker.

With the option to use rechargeable batteries and a bumper around the radio it should be a capable portable radio. In this review we’ll see how the radio sounds as well as try out the radio and Bluetooth modes.

Inside the shallow box is the radio itself, a mains adapter, quick start guide and safety/warranty leaflet. On first impressions the radio is a good weight, feels well made and is comfortable in the hands thanks to the soft bumper that wraps around the device.

When the radio is switched on for the first time it will scan for DAB digital radio stations. In the FM mode stations are found manually or by scanning up or down the FM band.

All the controls, except the lock switch, are on the front of the radio.

One of the best features of the Roberts Play 20 is the ability to use rechargeable AA batteries and charge them in the radio. A switch in the battery compartment selects between Alkaline and NiMH. A good portion of the quick start guide is dedicated to battery option and is well worth reading. We inserted four AA Energizer NiMH batteries in our radio. According to the specifications the up to 25 hours of listening is possible with alkaline batteries.

A headphone socket is conveniently located on the left side of the radio.

We normally praise Roberts for including comprehensive user guides with their radios. However, the Play 20 only comes with a quick start guide. The guide appears to contain all of the information that’s required to use the radio and the instructions are clear.

In DAB mode the radio found all of the stations we would normally receive. Reception was on par with other Roberts radios we have used too. The large colour screen is handy for browsing stations, showing several at a time in the list. This makes switching between digital stations quicker than on radios with a single-line display.

Reception of FM radio stations was fine. When scanning for stations the radio would often skip past them, but they could be tuned into manually. The station name would sometimes be shown after a short wait. If you know the frequency of the radio station you would like to receive you could always save it to one of the preset slots.

Setting up a phone to play music, podcasts and other audio over Bluetooth was easy. Once connected the controls on the front of the radio can skip forwards and backwards through tracks as well as play and pause. On the display the track name was shown during playback. This is handy to see something like the episode title from Pocketcasts.

Sound quality from the Roberts Play 20 is good from the single speaker. The quick start guide doesn’t list the size of the speaker or the output power, but we found it sufficient in a small kitchen and on a dining room table. Like the edges of the radio itself we found that the sound leans towards the soft side. Speech, phone-ins and sport commentaries sound absolutely fine. But for purely music listening we would also consider other Roberts radios or Bluetooth speakers.

A 3.5mm headphone socket is included on the left side of the radio. Sound quality from headphones is reasonable with good stereo separation on stereo stations. While the audio sounds much better than we experienced with the Play 10, it isn’t exceptional. Songs can sound rather soft and when switching to another radio the missing clarity and depth in music is quite clear. Speech stations with news, sport and phone-ins sound fine though.

In common with many Roberts radios the controls are well laid-out and clearly labelled. The power and preset buttons are a different colour to the others. This makes the most commonly used buttons for some users easy to see at a glance. A dedicated button for the Auto Tune function is also handy and saves digging through menus.

The tuning up and down buttons are on the right side of the controls, but the volume controls are closer to the middle of the radio. We found that this made them slightly awkward to use with one hand and we often pressed the tuning buttons instead by mistake. The buttons feel nice to use and aren’t overly clicky.

A colour display is increasingly prevalent on DAB digital radios. The screen on the Play 20 displays the mode, clock and signal strength in the radio modes. The station name and scrolling text is also shown in the DAB mode. Seeing most of the scrolling text at once is often handier than waiting for it to scroll, but all of the text on the display is fairly small. Some users may prefer the larger text from the ‘starburst’ displays on other Roberts radios, like the Rambler.

Saving and recalling the 10 DAB and 10 FM presets is easy. Four presets can be saved to the dedicated buttons with all the presets in the selected mode listed after pressing the Preset button.

The power and headphone socket on the side of the radio are well placed and easier to access than if they were on the rear. There is a USB socket but this is for software updates only.

The Roberts Play 20 is the most comfortable portable radio to use that we have reviewed. The rubber bumper softens the edges of the radio while the concave buttons are a pleasure to use.

It’s good to see a DAB digital radio that isn’t a plain plastic box or sporting a retro design. The Play 20 is a pleasure to use and comfortable to hold. Being able to charge commonly available batteries inside the radio is a great feature. Long after rivals’ proprietary batteries have stopped holding a charge and been discontinued this radio should continue to work with standard rechargeable batteries.

We listened to a mix of news, sport, talk radio and music over several weeks with the radio. Overall the sound quality is good and for us the benefits of portability and usability outweighed any desire for music to have slightly more clarity.

At around £85 the radio is slightly more expensive than some portable radios with similar specifications. If you don’t need Bluetooth another radio worth considering is the Roberts Play 10. 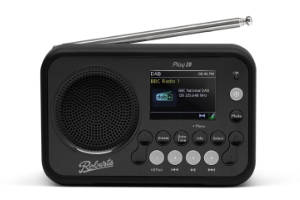