Windscreen antennas are often the easiest to install and most cost-effective option when upgrading to DAB digital radio in a car.

A difference between this antenna and most glass mount-antennas is the approach to grounding. Windscreen aerials normally have a self adhesive copper strip which attaches to the A-pillar. But the Calearo antenna uses a ground wire with a ring terminal. In vehicles like fibreglass cars and motorhomes this could be very useful.

The ground wire is quite short at approximately 150 mm. But this could be enough to offer more options for an installation if a grounding point is available near the top of the windscreen. The antenna uses 12V phantom power which is often provided by the car radio through the antenna cable.

In this review we’ll see how easy the antenna is to install and how it performs with reception of digital stations.

The Calearo antenna comes in a box with an instruction leaflet. A self adhesive pad to affix the signal amplifier to the glass is also included. The antenna has a short cable with a Fakra connector which connects to an extension cable.

The instruction leaflet contains some information about the antenna and the fitting process.

On first impressions the antenna looks bigger than other DAB antennas we have installed. It looks and feels well made but the separate extension cable will add to the cost.

Windscreen antennas like this have a self-adhesive backing which mounts on the inside of the glass. Once the ‘film’ part of the antenna is in place we can route the cable to the radio.

Car windscreens must be clean before installing a glass-mount antenna. This will ensure a good bond between the self-adhesive backing on the film part of the antenna and the glass. The instructions mention to use an alcohol-based cleaning agent on the windscreen.

For the best performance the antenna is installed vertically at the top of the windscreen, leaving a 2cm gap to any metal parts.

Good ground connections are always important with DAB antennas like this. As we would with a car amplifier we sanded back the paint on our grounding point to ensure the best possible connection. The grounding point we are using is where the sun-visor bracket attaches to the roof of the car.

As the ground wire has a little bit of slack to our grounding point we first used masking tape to position the antenna. Once the self-adhesive backing attaches to the windscreen the antenna we can’t move it, so this is a good way of testing the reception before the final installation.

Our Sony car radio provided power through the cable to the antenna. This might not always be possible. If you are using something like a DAB adapter without antenna power you may need to consider an antenna with a separate power lead.

We tested the antenna on a mix of streets, A- and B-roads and motorways. During our testing we found that stations with ‘good’ predicted coverage were all received as expected. On one journey of several hours on the A1 we noticed that we didn’t lose reception of national BBC stations at all.

Reception of local radio stations like BBC Radio Tees and TFM was also very good. While driving in Newcastle-upon-Tyne we were pleasantly surprised to receive some small-scale DAB stations.

We experienced some break up and loss of stations when driving in areas with poorer coverage. This meant that the sound might break up for several seconds before coming back. On the roads we normally use to test car radios and antennas we did lose some stations which other antennas would receive without breaking up.

Overall reception of digital radio stations was good. Based on the predictions from the digital radio coverage checker we received the stations that should be available.

The Calearo windscreen antenna feels well made and was quite easy to install. Having the small black box at the top of the windscreen also made the installation less obvious. We received all the stations we would expect based on a DAB coverage checker.

Having a grounding terminal instead of an adhesive copper strip could be useful for some vehicles. We’re often asked about installing a DAB windscreen antenna when there isn’t metal at the side of the windscreen. The Calearo antenna provides some options with its ring terminal in this situation.

The Calearo antenna costs more than other antennas when adding the cost of the extension cable. Also consider the Celsus glass-mount windscreen antenna. 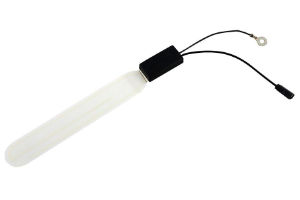