When upgrading a car to receive DAB digital radio stations an antenna like the Celsus DAB and AM/FM roof-mounted antenna often performs better than other options. The higher, external position on the roof often means that reception of stations is more reliable than can be expected with antennas like those installed on a windscreen.

Installing a roof antenna can be more difficult when it’s necessary to access the underside of the aerial and route cables to a radio. However, the neater appearance and better reception often makes it worthwhile.

The Celsus roof-mount antenna receives DAB, FM and AM radio stations. It looks like the factory installed antenna found towards the rear of the roof on many cars. Coming with the required DAB and FM/AM cables it also represents good value for money at under £50.

In this review we’ll be installing the Celsus roof-mount aerial on a 2006 Vauxhall Astra estate. The car already has a JVC DAB stereo, but we’ll be replacing the separate factory and aftermarket magnetic DAB aerials with the Celsus antenna.

The base of the antenna is flat which is suitable for the Astra. It might not be suitable for cars with an antenna above the windscreen or on the rear wing.

The Celsus roof-mount antenna came with two extension cables: one for the DAB connection and another for AM/FM. There weren’t any instructions included with the aerial.

On first impressions the antenna feels well made. It also looks like the original Vauxhall antenna which is useful for retaining a ‘factory’ appearance. The antenna itself is shorter than the original unit and the colour is very similar.

The antenna needs a 12V feed and a red wire is already terminated with a female spade connector. We’ll be making the connection with the antenna power cable from the back of the JVC radio.

We ordered separately 5m of suitable power cable and some spade and crimp connectors. We also had to hand some screwdrivers, trim removal tools, a box spanner, adjustable spanner, a crimping tool, radio removal keys and some general purpose grease.

The process of installing a roof-mount antenna can depend on the particular car. If you have an interior light under the mounting for the antenna the installation could be quite simple. In the Vauxhall Astra we needed to remove the C-pillar trim so that the headlining at the back could be lowered enough to access the nut for the antenna.

The old antenna had a single cable which plugged into a socket attached to the underside of the roof. We removed the plug and used a box spanner to undo the nut on the old antenna. After lifting the old aerial from the car we cleaned the roof to ensure a good seal between the new antenna and the roof.

A washer and an o-ring come on the base of the antenna. The hole in the roof of the Astra is square, so we removed the round washer and stretched the o-ring around the square part of the base. When compared with the old antenna we can see that this also used the o-ring.

After dropping the antenna cables through the hole we tightened up the new nut. The DAB, FM/AM and power cables were connected and routed through to the dashboard. We opted to add an inline fuse holder and appropriate fuse between the radio and the antenna. On the base of the new antenna we also used a small amount of grease that could help prevent water ingress.

Connecting the new antenna to the JVC car stereo was easy with the correct connectors on the supplied cables. Before re-installing all the trim and radio we tested the reception of DAB, FM, MW and LW stations. With stations received on all bands we carefully put back the interior trim parts.

After installing the antenna we scanned for DAB digital radio stations on the car radio. Immediately we received more stations than had been found with the car’s old DAB antenna.

Before installing the Celsus antenna and with the car located in Lowestoft in Suffolk we had received the BBC’s national stations, both national commercial multiplexes (with stations like talkSPORT and Absolute 90s) and local stations from the Norfolk multiplex.

After installing the antenna we also received local digital stations for Suffolk which were not found before. This means we could now hear stations like Nation Radio and BBC Radio Suffolk on DAB. The digital radio coverage checker predicted no coverage of these so this was a welcome bonus.

Reception of FM stations was also good with all the expected BBC and commercial radio stations available without any hiss or crackle. Medium wave stations like Radio Caroline, Absolute Radio and talkSPORT all sounded very clear. Finally we were able to receive BBC Radio 4 and RTÉ Radio 1 on long wave.

While driving in Suffolk we found that reception of stations like Planet Rock and Virgin Radio was better than with the old antenna. We sometimes lost the signal for those commercial stations on parts of Lowestoft seafront. This is inline with the prediction from the digital radio coverage checker.

Overall we found that reception of DAB digital radio stations was very good, exceeding the predicted coverage in the areas we used the antenna. When switching to FM, medium wave and long wave we found that we could receive all the stations we expected. While most analogue stations are available digitally some are not, and it was good to be able to receive Radio Caroline and RTÉ Radio 1.

The Celsus roof-mount DAB and FM/AM antenna provides very good reception of digital and analogue stations. It feels well made and retains a ‘factory’ appearance.

Ease of installation will depend on the car but we didn’t encounter any problems in the Vauxhall Astra. The addition of instructions would be welcome, but if you’re tackling this sort of installation and have the required tools and cable for the 12V feed the process might be self explanatory. If you’re not confident with the installation you can ask a car audio installer or an automotive electrician to complete it for you.

Reception of digital stations was very good and an improvement over the existing DAB antenna. Equally good reception of analogue stations is useful for those stations which aren’t available digitally. The price of the antenna represents very good value for money. 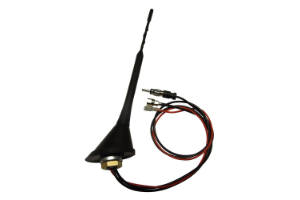