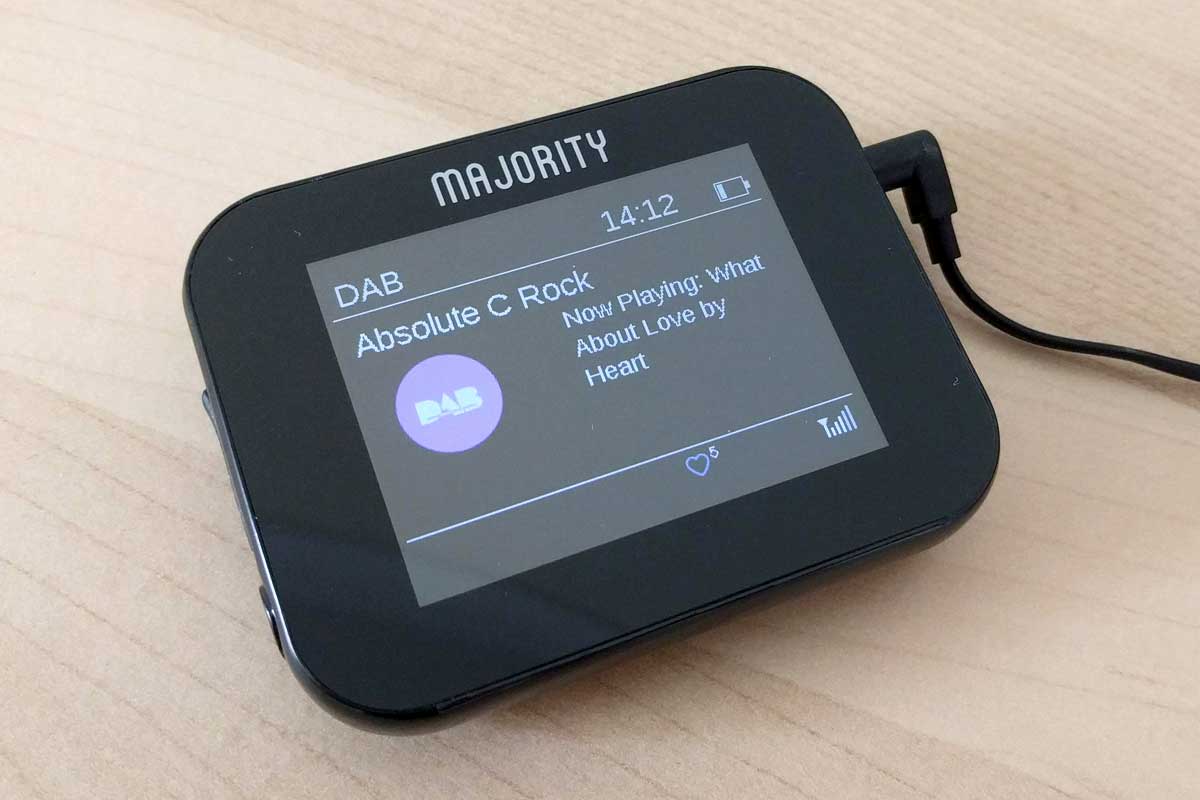 The Majority Parkside Colour packs digital radio reception, a rechargeable battery, colour display and microSD card slot in a small package. It's best in areas with strong DAB signals, but MP3 playback means podcasts and music can fill the gap.

The Majority Parkside Colour is an interesting new personal digital radio. In addition to FM and DAB/DAB+ reception it can play files from a microSD card. The design is intriguing too, with the front of the radio featuring only a colour display. A built-in rechargeable battery makes this a well-equipped device for the money. In our Majority Parkside Colour review we’ll look at these features and see how it compares to other personal radios.

First impressions are good. The box and the included instruction booklet have a quality feel to them. The box doesn’t have the digital radio tick mark, but does carry the DAB+ logo. In the box with the radio and instructions are a set of earphones and a USB charging cable. There’s no power adapter, but you can plug the USB cable into a computer or phone charger.

On the front of the radio there’s a full colour LCD display. Along the top are previous/next buttons, an OK button which doubles up as a lock button and the menu button. The left side has the USB charging port, microSD card slot and power button. On the opposite side are the volume buttons, a preset button and the 3.5mm headphone socket.

The device feels light and easy to hold. The buttons provide just enough feedback without feeling squidgy. The black plastic is quite to show fingerprints, but this is unavoidable.

Before using the radio for the first time the battery should be charged. We plugged it into the USB port of a laptop and it was soon ready to go. In common with other digital radios it will scan for stations when used for the first time, so the earphones are plugged in and extended.

Setting up the Majority Parkside Colour

In the first scan for digital stations the Majority Parkside Colour found all of the stations predicted by a postcode coverage checker.

The value of a large screen is quickly apparent when browsing through the 64 stations. Although the same number of button presses are required to navigate from Absolute to Magic Soul, being able to see several stations at a time makes this quicker than scrolling on radios which display a single station at a time.

Stations are chosen by using the next and previous buttons on the top of the radio. A station can be selected by pushing the OK button in the middle. After tuning into a station the display can show programme information (scrolling text), the time, battery level and signal strength. Pushing the menu button will change the information that’s displayed.

Presets can be saved for favourite stations on DAB and FM. The dedicated preset button makes recalling those stations quick and easy.

Music and podcasts can be played from a microSD card. The memory card is not included, but cards up to 64GB are compatible with the radio. As well as MP3 files the device will play MP2, AAC LC, WMA and FLAC files. It was difficult to tell the difference between MP3 and higher quality FLAC files during playback. The option of FLAC playback means not having to make MP3 versions of songs if your library consists of FLAC files.

The volume range is quite good and pays off when listening to quieter podcasts.

When the radio is switched on it will enter the mode which was last used – e.g. DAB digital radio. Switching to FM or music playback is done with a single press of the power button, then selecting the desired mode. The radio is quick to respond to button presses.

Backlight settings can be changed for the display to adjust the timeout and level of screen brightness. In even moderate daylight the display can be difficult to read outdoors. Trying various settings did not help outside, but the display is bright and easy to read indoors.

Switching the radio off takes two long presses of the power button. The first long press or hold of the button puts the radio into a standby mode. This displays the time and locks the other buttons. The power button is held in again to switch the radio off completely. If you’ve always used a personal radio which switches off quickly it can be easy to forget about this.

Although the radio does find all expected stations during a scan, tuning into stations sometimes results in a ‘No Service’ message on the screen. During a 30 minute walk for this Majority Parkside Colour review the radio lost reception several times. The Roberts SportsDAB5 we reviewed doesn’t lose the signal of the same stations on the same route.

The device performed very well during a day in Dublin. Reception was excellent whether walking in the city, travelling on a coach or travelling on a ferry. The DAB+ version of RTE stations in Ireland also sounded very good at 64kbps.

Reception does seem better in cities and areas with very good coverage. The radio appears to perform better when stationary on a table or in a pocket than when travelling by train or walking.

Fortunately if digital coverage is lost it’s possible to switch to FM. This is done with a single press of the power button, then using the left/right buttons to select FM and confirming with the OK button.

FM reception is very good and if Radio 4 was lost on DAB it was often available on one or more frequencies on FM.

During MP3 and FLAC playback we found that some FLAC files wouldn’t play. No error message is displayed on the screen and the songs on the SD card do play on a PC and Mac. When switching to SD Card playback for the first time the unit froze and could not be switched off. As the battery is non-removeable we waited for for the radio to run out of power and switch off. After a day and a half the display still showed the SD Card icon. A tiny, unlabelled hole on the rear of the radio appeared to contain a reset button and the unit was restarted. 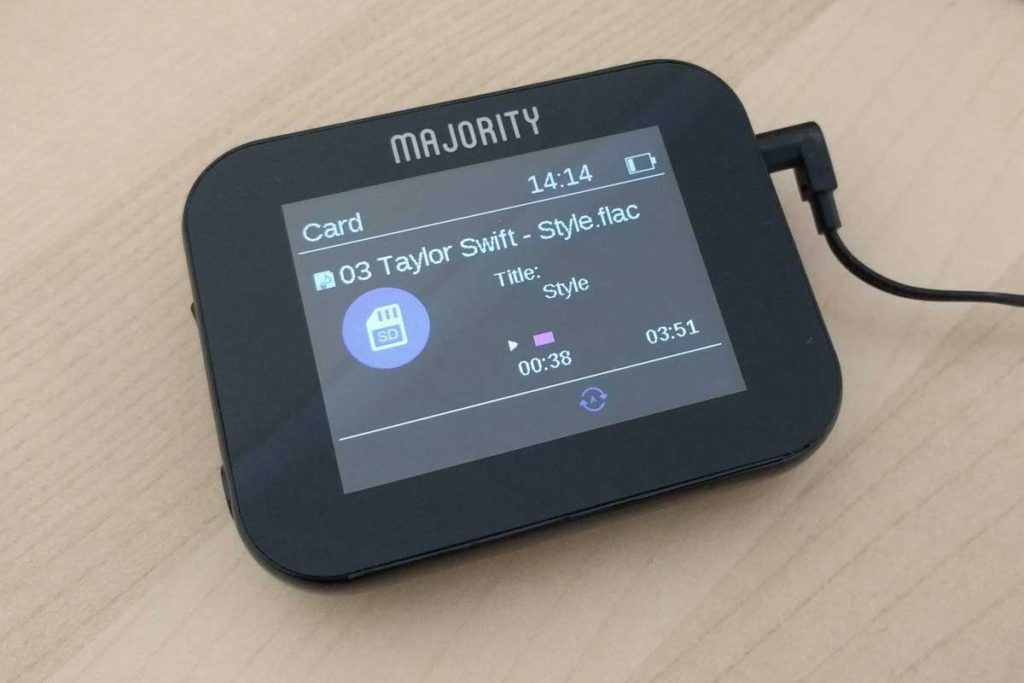 When the radio is plugged into a PC or Mac it does charge but doesn’t appear as a device. The SD card has to be removed and inserted in a PC for files to be copied over. If your PC only has a normal SD card slot you’ll need an adapter from microSD to SD. Some memory cards come with these.

Files are displayed as they are organised on the card. We created folders for Music and Podcasts. Inside the Music folder we organised songs by artist and album and this worked well.

The Majority Parkside Colour packs many desirable features into a small package for a great price. Digital reception could be better. On the same journeys or in the same location the Roberts Sports DAB 5 doesn’t lose stations as often or for as long.

The Pure Move R3 has a bigger rechargeable battery and provides more listening time. But the Move R3 costs more than twice as much. Neither the Pure or Roberts models have an SD card slot.

Battery life is impressive and being able to charge from any USB port is useful when travelling. Being able to play music or podcasts from a microSD card is very handy.

You won’t find Majority radios on the High Street. The brand is online-only and its devices can be purchased on Amazon and ebay. A three year warranty is included. Online support could be off-putting for anyone who encounters and problem and would like to speak to someone by phone or in person.