The Sony XDR-S41D continues Sony's line of well designed and easy to use DAB radios.

The Sony XDR-S41D is a portable radio which receives DAB, DAB+ and FM radio stations. It comes in black, white and blue and is the most affordable digital radio from Sony. Compared to the previous XDR-S40D model the radio has a more premium look and comes with a better display.

The radio has an RRP of £60 but is often on sale for around £50. In this review we’ll set up the radio, see how it sounds and what it’s like to use.

Features and setting up the Sony XDR-S41D

Setting up the Sony XDR-S41D is quite simple with the included instructions. After extending the telescopic antenna and providing power from the mains or batteries it’s ready to scan for DAB stations.

If you listen to FM radio stations too they can be tuned in by pressing the dedicated DAB/FM button.

In our location reception of DAB and FM stations was comparable to other radios we’ve reviewed. The radio did find all the digital radio stations which are available in this area.

The design of the radio brings it more in line with other models in the Sony range. The glossy plastic from the previous model has made way for a more premium looking matt finish. Build quality feels good but it would have been good to see rubber feet instead of plastic.

Power comes from the included AC adapter or batteries inserted in the rear battery slot. According to Sony four AA (LR6) batteries should provide 25 hours of listening to DAB stations or 27.5 hours of FM listening.

The radio only has a one year manufacturer’s warranty which falls short of the two or three years offered by other brands. Sony has a good reputation for keeping old instruction manuals online. Unfortunately accessories like a replacement power adapter aren’t sold straight from the company. Other brands do have online shops for adapters, antennas and so on.

The XDR-S41D is the most affordable DAB radio from Sony. The larger XDR-S61D more than doubles the audio power output with simpler controls. Sony’s smaller XDR-P1DBP is an ultra-portable choice.

A single speaker is behind the metal grille on the front of the radio. The specifications list the 4 ohm speaker as being approximately 80 mm in diameter. The listed audio output power of 650 mW is an improvement on the previous XDR-S40DBP model.

Overall the sound quality from the XDR-S41D is very good for a portable radio. Some small digital radios can be too tinny or end up booming with little clarity. Music stations like BBC Radio 2 and Planet Rock sound fine and could benefit from more bass. Speech stations like BBC Radio 4 and Times Radio come across clearly and are easy to listen to. For a radio which will live in a room like a kitchen the Sony does a good job. However, for bigger rooms or those times when you really want to turn it up the bigger XDR-S61D might be better.

There aren’t any customisable equaliser presets or settings for bass and treble.

The white backlit LCD display is clear and easy to read. Although it’s not a colour display as we’re now seeing on many portable radios the same information is shown. There is a good hierarchy to the information too. The largest text is for the station name and a larger clock appears at the bottom of the display. Scrolling text, the mode (e.g. DAB) and the battery level are also shown.

A larger display also makes browsing for stations quicker. Pushing the toggle switch up or down shows five stations from the list will on the display. This is better than seeing a single station name at a time, especially with some areas now receiving around 100 digital stations.

The toggle switch (or ‘jog lever’ in Sony parlance) also pushes in to select. This saves space on the front of the radio and works well enough. A dedicated auto tune button is also good to see.

A volume control is on the top of the radio. This helps with the clean, rounded design while keeping a rotary control for volume. Previous Sony digital radios have used a convenient rotary knob on the side of the radio. The volume knob doesn’t feel as fluid as that on older radios and without the small protrusion can’t be adjusted as easily with a single finger.

Preset buttons for five stations each in DAB and FM modes are situated on the top of the radio. Saving presets is very easy, only requiring tuning to a station and then holding down the chosen button. The third preset button has a small dot to indicate that it’s the centre one.

This a very good way of storing and recalling presets. If you listen to different stations through the day or switch between a few different ones for sport commentary this is very convenient.

A wake-up timer can be set on the radio when it’s being powered with the AC adapter. The only options are the time, volume and whether to use the last listened to station or a preset. With the sleep timer the radio can switch off after 15, 30, 45 or 60 minutes.

Verdict on the Sony XDR-S41D

The Sony XDR-S41D is a good choice for a portable DAB and FM radio. The design is smart and the controls are easy to use. As the number of digital radio stations grows the larger display makes browsing quicker. As with many small digital radios there could be more bass when listening to music, but speech stations sound great.

Sony has alternatives if you’re looking for something more substantial or with Bluetooth. There are similarly priced radios from other well-known brands which do have Bluetooth. But as an FM/DAB radio the Sony model feels better made and nicer to use.

As with the previous entry-level Sony digital radios, this model is definitely worth considering. 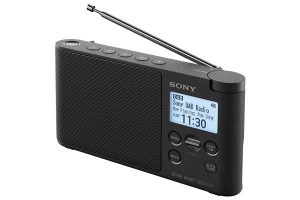