Can I get BBC Local Radio stations on Freeview?

In June 2016 the BBC made its local radio stations available on Freeview across the UK.

The local radio stations can typically be found on channel numbers 719 to 735 on Freeview boxes, recorders and televisions. 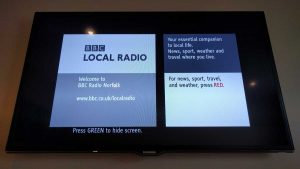 This pattern is repeated across the UK.

In common with DAB digital radio additional information is available when tuned to a BBC local radio station, such as details about the current programme.

On Sky, Freesat and free-to-air satellite only BBC Radio London is available. There may be cost and sports rights issues which prevent the BBC from launching around 40 of their local stations on satellite.

Alternatively you can navigate to the radio section of the TV Guide on your television. Any BBC local radio stations will be listed after the national services. If you prefer using the channel numbers you can find BBC Radio 1 on Freeview channel 700. Then press the channel up button or scroll through the channels until you find your local BBC services.

Unfortunately other non-BBC local radio stations are often not available on Freeview. You might find stations like Heart and Capital are available on your Freeview television. However, the programmes will be from Capital in London instead of your local Capital – for example, Capital Yorkshire.

Do you have questions about digital radio?

Ask your question using the form and we'll post the answer on the Questions section.