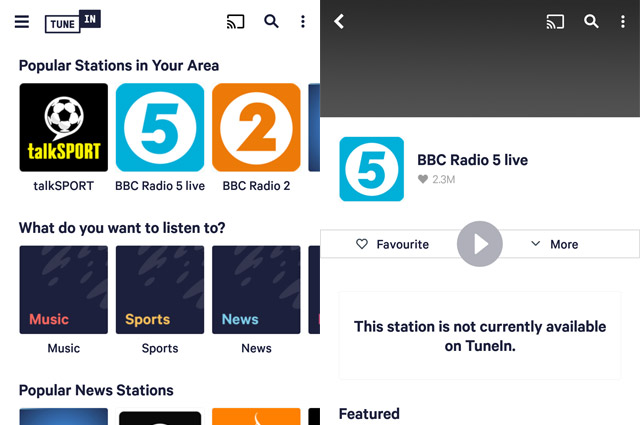 The BBC’s radio stations have been removed from the TuneIn radio app in the UK.

Users of the smartphone app are no longer be able to listen to the BBC’s radio stations and will need to switch to BBC Sounds or Radioplayer. In addition to apps for iOS and Android, TuneIn is found on smart TVs and streaming devices. The move to remove the stations was announced in August.

The change also affects Amazon’s Alexa smart assistant and Echo devices. Users who have previously listened to BBC stations with the TuneIn skill have found that alarms no longer play a BBC station. Requests to Alexa to play a BBC radio station from TuneIn often result in a different station being played.

Although the BBC has suggested that users switch to the BBC’s own Alexa skill, this currently doesn’t offer alarms or multi-room support. Writing in a post on the About the BBC blog, the BBC’s Director of Distribution & Business Development said:

“We would love to support alarms and timers and other features such as Multi-Room Music Playback but at this time it is not possible to add this functionality to the BBC Custom Skill.”

In the post Kieran Clifton also says that the BBC is “working closely with Amazon to find a solution”.

The BBC says the reason for the withdrawal of stations is due to the data which is available from TuneIn. The corporation says they it asks platforms to provide “meaningful data” or allow listeners to log in to their BBC account, and that TuneIn doesn’t provide either of these.

Podcasts from the BBC are still available through TuneIn. Some older devices that include internet radio and are powered by TuneIn will not be affected. BBC radio stations will still work via TuneIn on Sonos speakers while alternative options are explored. A list of devices which are affected by the change can be found on the BBC Sounds website. The changes will only apply on TuneIn in the UK.

The changes affecting TuneIn come as the BBC iPlayer Radio app was closed. Listeners are expected to transition to the BBC Sounds app which provides access to live radio, on-demand programmes, music mixes and podcasts. The new BBC Sounds app requires iOS 11, Android 5 or Amazon OS 5 (or above), which means some Android, iPhone and iPad users will not be able to use BBC Sounds or download BBC iPlayer Radio.

The BBC Sounds app also doesn’t feature an alarm clock, but the BBC says on its help pages that it hopes to work with Apple and Google on this.

Google Home smart speakers and devices are not affected by the change to BBC stations on TuneIn.

All of the BBC’s radio stations can still be played with a command like “OK Google, play BBC Radio 2”.

Alarms can also be set on Google Home devices. Google Home speakers can be asked to set an alarm with a command like “Set an alarm to play BBC World Service at 7am”.